0
No products in the cart.
Back To Organic fertilizers 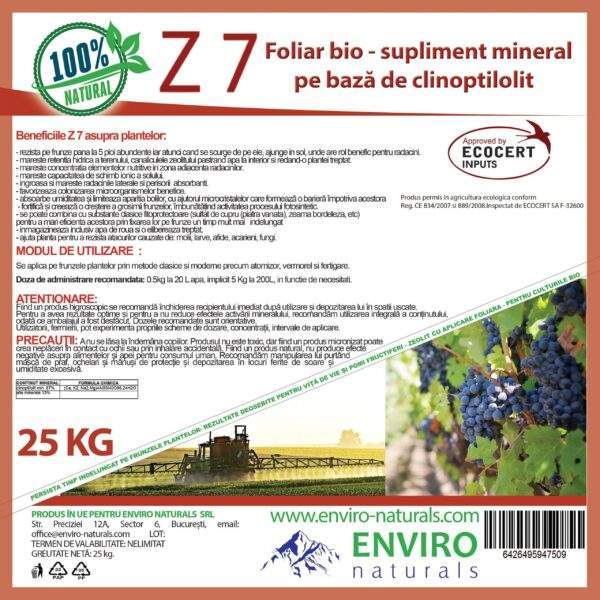 The natural treatment against clinoptilolite pests has been designed in order to eliminate insects harmful to crops of any type but also molluscs that feed on plants and can cause considerable damage to them.

To eliminate pests, chemical insecticides are widely used, which have a strong toxicity, of which the organic ones are the most used type of insecticide nowadays, most of them being synthetic chemicals.

The way in which natural foliar based on clinoptilolite acts on mites, insects, fungi, mollusks, but also on plants clearly differentiates it from chemical insecticides and credits it as an extremely effective and, at the same time, environmentally friendly product. :

»Thanks to its water absorption and desorption capacity, the Z7 Enviro Naturals product manages to destroy the humid microclimate on the surface of plants that is conducive to the multiplication of fungi and insects in moisture. Thus during the night it stores the water that it releases during the day, in the presence of heat, thus maintaining a constant humidity level inadequate for the multiplication of pests;

»Because the product is in powder form, it manages to penetrate and adhere to the surface of the insect’s body despite the fact that most have hairs of defense, this blocks the release of carbon dioxide and causes the slow death of insects.

»If the harmful insect to be eliminated occurs and penetrates the stomata of the plant’s leaves, the clinoptilolite powder adheres to the surface of the stomata and prevents the insects from oxygenating, causing their death.

»When a foreign material adheres to the surface of the body or on the brushes of an insect, it tries to remove it.

This continuous brushing action causes deep damage to the insect. On the surface of the wound appears a fluid, from inside it, which the clinoptilolite, due to the microporous structure, will absorb and will cause the death of the insect by dehydration;

»Mushroom spores are present in all phases of plant growth and grow in conditions of excessive humidity. Therefore, by using the Z7-Enviro Naturals contact product as a preventive treatment from the beginning of the vegetation period, it can avoid the inconveniences caused by the appearance of molds;

»In conditions where a crop is already affected by molds, clinoptilolite powder helps to cure plants due to its moisture-regulating properties, preventing the germination of spores and the appearance of mycelium, which would give rise to a new generation of fungi;

»Enviro Naturals natural foliar, through its constant use throughout the vegetation of a plant, gives the farmer the opportunity to choose the time of harvest according to what he wants to achieve and is not obliged to harvest due to external factors;

»In the areas where this foliar is applied, the number of harmful insects decreases and, even if some of them do not disappear permanently, they are much less active, weaker and as a population, much reduced.

As a special fertilizer for vines. Medium wound up to 27% higher.

How to use the vine:

Foliar application in the form of dry powder: use 5-8 kg./ha for each treatment.

Foliar application in liquid dispersion: use at 200 l water 5 kg of Z7 BIO dispersed in the minimum necessary water to cover the entire surface or added to the mixture with the fertilizers normally used, three sprays are made during the vegetation period.

Spray 1: when the grain is the size of a peppercorn.

Spraying 2: when compacting the bunches.

Spray 3: at the entrance to the lever.

for fruit trees and shrubs four sprays per year:

There are no reviews yet.

No more offers for this product!

There are no inquiries yet.

Z 7 – BIO FOLIAR BASED ON ACTIVATED AND PURIFIED ZEOLITE 0.5 KG

Z 300 – BIO PRODUCT BASED ON ACTIVATED AND PURIFIED ZEOLITE FOR FLOWERS 0.65 KG

METAL CONCEPT
0 out of 5
Translate »